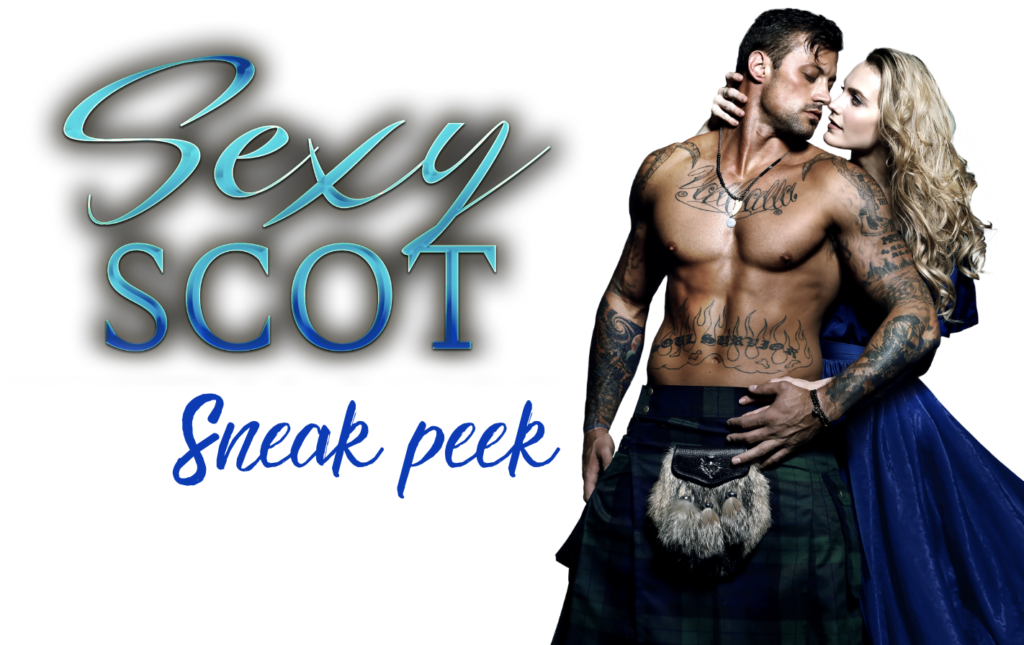 Get an even longer extended sneak peek ahead of March 31st when Sexy Scot (Highlander's Through Time, Book 2) releases on Amazon, Kindle Unlimited and on audio by subscribing to chat with the hero of Sexy Scot, Greyson McCaim. 💬

Greyson and his brothers dropped the silver cross at the same time, the plush Persian rug in their father’s study capturing its fall. Staring at it, and then each other, none of them spoke, all of them acutely aware of the empty space where their brother Rhys had been standing moments before. Even Ian was stunned into silence, a rarity for the youngest McCaim.

None of them had the answer. Rhys’s disappearance was illogical. It should have been impossible. And yet, there was no disputing he was gone. Their big brother, the person who’d always held them together, had just disappeared on the final word of the ancient Gaelic chant none of them had thought would work.

“No.” Greyson recoiled from the others, shaking his head. “No.”

“Grey, he’s gone,” Ian said. Both he and Reikart were looking at Greyson expectantly, as if they thought he would know what to say. What to do.

But he had . . . nothing. Business was his expertise, not magic. He’d always thought their father’s fixation with time travel and ancient Scotland was the product of a sick mind, an inability to cope with their mother’s disappearance. He’d never imagined there might be something to it.

No, Rhys had to be here somewhere. Storming out of the study, he passed all the evidence of their father’s obsession—stacks of ancient books, scattered papers, scrolls, and assorted artifacts—and burst out of the French doors. His brothers were already shouting after him, but he stayed focused on his mission, calling Rhys’s name as he headed down the marble entranceway to the back doors, his pulse rising in tempo with his steps. He could hear his own voice becoming more and more desperate with each room he searched.

And there were plenty of them.

good to their family. But billions of dollars hadn’t stopped their mother from disappearing. Nor had their fortune curbed their father’s obsession with finding her. Now their father lay in a coma, and their brother had just disappeared into thin air. The McCaims had fallen apart. Expensive portraits, imported vases. They meant nothing.

Which was just as well since his baby brother, who’d followed him on his ill-fated trek through the house, hurled one of those vases against the hardwood floor, a temper tantrum better suited to a toddler than a twenty-seven-year-old man. Ian was only three years younger than Greyson, but it might as well have been a lifetime in terms of maturity. Reikart had followed him, his brow creased with worry.

Get a grip, Greyson. They need you to take charge. You’re the next eldest. The heir apparent.

But the fit of rage was over, another emotion following in its wake. Ian sat heavily in the hallway, tears running down his cheeks. Reikart didn’t hesitate—he put his arms around him, holding him like a wee babe, as their mother would say. Greyson did the same.

“We will figure this out,” he said, regaining the control that should never have left him. Time to accept the truth. He knew what had happened in that study. They could call Rhys’s name all day, but he wasn’t going to amble out of the guest suite or the bathroom. He was gone.

“How?” Reikart asked. “How will we figure this out, Grey?”

Damned if he knew. But he could guess.

Ian pushed them off, his large body easily breaking away from their grip. He hadn’t been a football star for nothing. “Do you know what you’re saying?” he asked, almost an accusation.

Greyson would give his little brother one thing, he didn’t have a self-conscious bone in his body. Ian didn’t give a shit that he’d just cried like a baby or tossed a $1,500 vase against the wall. Some days he wished he could be more like that. Right now, though, the last thing they needed was two temperamental McCaim brothers. Time to roll out his self-control and take command of the situation.

“I know exactly what I’m saying.”

It was fucking insane—minutes ago he’d called this a “fantasy”—but he’d seen it happen with his own eyes. They all had. They couldn’t keep pretending otherwise.

Standing, he held out a hand, and Ian grabbed hold of it. Greyson pulled his brother up and silently led the way back to the study. He got there first. The strange silver cross lay where it had fallen, and he made his way to it, compelled. It looked ancient, as if it were . . .

He knelt beside it, reaching out. Just as before, it was cold to the touch. More than cold—it gave him the sensation of being outside in a bracing wind—the feeling even stronger than it had been before. Lifting it, he turned toward Reikart and Ian.

“I can’t believe I’m saying this, but it worked. There’s no other explanation. You saw what I saw. Rhys disappeared. Which means Dad was right all along.”

shook his head. “That makes total sense. Mom didn’t actually disappear five years ago. She time-traveled from the past before we were born and one day—poof—went back home. And now Rhys has gone back too. Poor bastard always wanted to go to medieval Scotland. Maybe he should have settled for a theme restaurant.”

If Rhys were here, he’d have something to say about their brother’s smart-ass tone. Greyson ignored it. He could understand Ian’s anger. And Reikart’s persistent look of disbelief. But they weren’t really left with much of a choice here.

“Grey,” Reikart said, trying to reason with him “You don’t seriously believe that, do you?”

He waited for one of them to come up with something, hoping it would happen. But he already knew better. There was no disputing the facts. Their father had slipped into a coma, and they’d come to his study to search for clues about their mother’s disappearance. What they’

d found was this silver cross and a chant in an ancient tongue. On Rhys’s insistence, they’d held the cross and recited the chant, and Rhys had disappeared.

It was absolutely crazy. Insane. But it had also happened.

They’d all thought their father had gone off the deep end—so much so that Rhys and Greyson had taken control of their family business. But this meant he wasn’t crazy after all. This meant their mother might actually be from thirteenth-century Scotland.

His brothers were still looking at him expectantly, hoping he could pull answers out of his ass, but he had none to give them. It was more pressure than he’d ever felt while making a business deal.

“We’re going to try it again.”

Both Reikart and Ian erupted at once. He immediately cut them off.

“We’re going to try it again, and this time we all go back.”

“Pfft. Back through time, you mean?” Ian was clearly still in denial.

“Didn’t we try to do just that?” Reikart asked. “But Rhys is gone, and we’re still here.” He had not said dumbass, but his look said it. “What makes you think the resul

t will be different this time?”

Greyson glared, but his brother was right. Something had gone wrong last time, which meant they needed a contingency plan.

“If only one or two of us get through, whoever’s left behind has to keep trying.”

The contingency plan was shit, but it was all they had. Greyson pretended he wasn’t absolutely terrified.

Neither of his brothers looked convinced.

No one said aloud what he was sure all three of them were thinking. Rhys and their mother could both be dead. Did it kill you, traveling through time? Who the hell knew, when it wasn’t supposed to be possible in the first place. They were dealing with dozens of big, fat unknowns here.

The stress of all those unknowns had nearly destroyed their father, a man so determined and driven he’d built a billion-dollar shipping company from one ship he’d spent his life savings to purchase.

“Mom. Rhys. They could be in trouble.”

And that was all it took. With those five words, his brothers reached out to touch the Celtic cross he still held. They turned as one to look at the chant Rhys had tacked to the wall, scribbled on a piece of scrap paper. It meant nothing to him, but Rhys had thought the words significant. They read them together, slowly, carefully, Greyson’s sheer will keeping his hands from shaking.